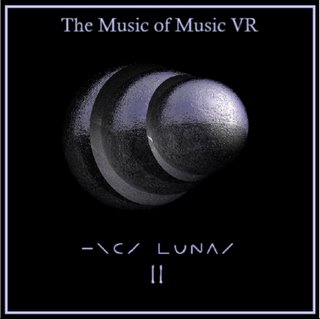 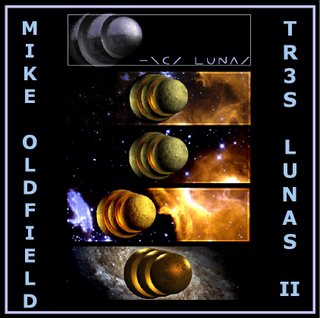 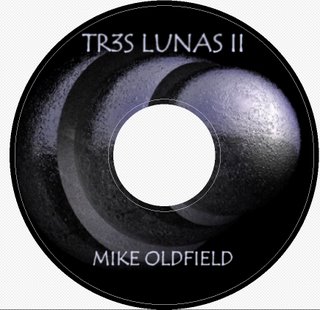 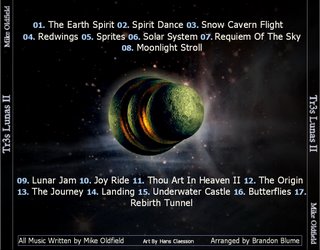 ( for those who haven't listen to this one yet )

In the beginning, Mike Oldfield released a revolutionary and original 3D game for PC (Macintosh computers were unsupported) in 2002 entitled Music VR in which you explore strange 3D atmospheres and locations and interact with creatures and characters of all shapes and sizes in a quest to find and collect 7 golden rings in an attempt to make the desert grow while experiencing a brilliant collage of breathtaking music and beautiful visual graphics along the way. Shortly thereafter he released a soundtrack of the game called Tr3s Lunas which contained the full game on a separate CD.

The soundtrack fell short, however, as it did not contain all of the music that was found in the game. In an effort to please those who had a Macintosh computer or no computer at all, several individuals took the extra sounds that were used for the game and put together mixes of all the different themes from Music VR that weren't on Mike's Tr3s Lunas album and created new albums for the fans' enjoyment. Among the many brilliant collages of MVR music created and released via the internet, two of the biggest highlights were Marcus Junglas' "Return to the Origin" (which can be found here, and also a CUE sheet to separate the one long track into many here) and my own "Tr3s Lunas II".

Since their release, Return To The Origin, Tr3s Lunas II, and other MVR fan-mixes have given many Mike Oldfield and Music VR fans alike (including myself) hours of enjoyment. If you're a Mike Oldfield fan and haven't played Music VR or would just like to listen to the music without playing the game, then I give you Tr3s Lunas II as a free download. You won't be dissapointed!